Market Demand
Market Status
Main roads with heavy traffic, such as major and minor highways, have traffic lights to manage traffic, but back streets and Zone 30, such as collector roads and local roads, have mostly passive safety facilities, like blinkers and reflectors.
These systems are poorly effective due to theirlow visibility and attention effects, so in almost cases, cars move by drivers judgment.
As the road network, except for highways, has been maintained well and the budget is not sufficient, it is necessary to repair and make effective use of existing reads, instead of building new reads. In addition, efforts to raise people's perception on traffic safety by improve their level of awareness.
Traffic accident status
According to data announced by the Road Traffic Authority, most of car accidents take place on Zone 30 whose width is 12m or less (over 70% of casualties happen on these roads). In addition, more than 60% of pedentrian deaths take place at night, so safety measures during nighttime should be prepared.
According to data including omitted unreported data, most, or over 90%, of car accidents take place Zone 30 and back streets, leading to social costs of more than 10 trillion won annually.

Intersections at main roads have traffic signals to manage heavy traffic, whereas intersections at smaller roads are mostly non-signalized intersections, which leads to drivers ultimately making the most important decisions.

It is difficult to install traffic signals in low-traffic residential areas and narrow side streets around schools, which leads to drivers making the most important decisions, which may cause many car accidents. 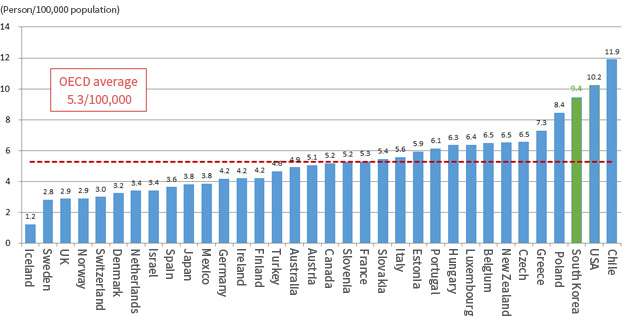 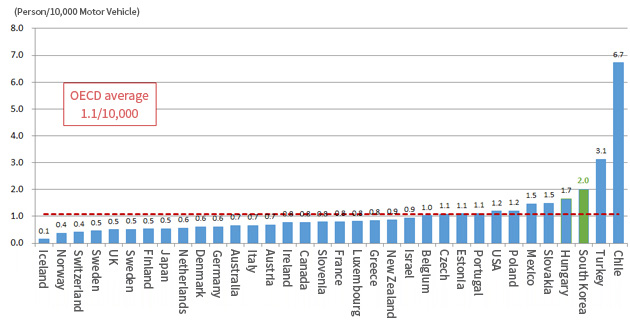 < Number of Motor Vehicle Fatalities per 10,000 population >
Weakness in Traffic Safety
South Korea has the highest pedestrian fatality rate by 39%.
Current solution
The nation invests most of the budget to places where traffic accidents frequently happen to improve them, but in reality, improvement is being focused on wide reads with geaby traffic, such as major ad minor highways, where accidents take place less frequintly.
Uniformed and passive facilities, such as pavement to provent slipping, blinkers and reflectors, have been installed as a way to improve places where accidents happen frequently.
Countries with advanced traffic systems have introduced the Zone 30 system to restrict the speed limit at 30km/h to reduce car accidents. Korea also is improving school zones.
Future Solution
Zone 30(School zone, Silver zone and Zone 30) should be expanded. According to data, most of accidents happen in back streets and Zone 30 whose width is 12m or less, so more money to be invested in these areas and their improvement should be made. It is defficult to install traffic lamps in these residential areas and commercial districts to control all intersections because these places are narrow and due to civil complaints and high installation costs.
Considering such reality, safety facilities are necessary in intersections without traffic signals. To solve this problem, it is necessary to develop active, intelligent and environment-friendly systems, instead of existing passive systems.
Road functions will be improved, human and physical damages will be minimized and social costs will be reduced by developing products and installing them in accordacne with such reality.
Development of new market
As evidenced by data from the National Policy Agency and the Road Traffic Authority, up to over 70% of the nation's car accidents actually take place on back streets and Zone 30 whose width is 12m or less, not on highways. In spite of such a situation, there are almost no active safety facilities on those roads. As these facilities can be applied to numerous places domestically and internationally, their marketability is very significant.
Development of new technologies for intelligent road facilities
Whereas traffic lights control traffic on highways, card move by autonomous judgment of drivers and pedestrians on other roads. In consequence, inattention and carelessness and cause accidents and measures are necessary.
Accordingly, our company wants to make a contribution ot saving huge social costs and reducing physical losses and casualties from accidents through developing facilities that judge approaches of vehicles and actively express wigh now technology.